The Association for Goldsmiths’ Art (GfG) , based in Hanau, exists to promote jewelry and hollowware design by means of contests, exhibitions, publications, and awards. The GfG’s most important award previously was the “Goldener Ehrenring”/”Golden Ring of Honour”, which between 1933 and 2014 acknowledged the life’s work of internationally recognized jewelry and hollowware designers, who included Elisabeth Treskow (awarded 1938), Max Fröhlich (1965), Mario Pinton (1975), Yasuko Hiramatsu (1994), Peter Skubic (2005), Tone Vigeland (2008), Otto Künzli (2011) and Robert Smit (2014).

With the awarding every three years of the 5,000 Euros Friedrich Becker Prize, a private endowment by Hildegard Becker in Düsseldorf, the Association for Goldsmiths’ Art remembers the outstanding goldsmith and designer of kinetic objects Professor Friedrich Becker (1922 – 1997).

From November 6, 2016, through January 12, 2017, the German Goldsmiths’ House in Hanau will be presenting the exhibition 18th Silver Triennial International. The Silver Triennial is one of the most important international competitions in the area of silversmithing and metal design. This year 138 artists from 24 nations participated in the main and youth competitions. The jury selected seven works as prizewinners and 77 objects by 65 artists for the exhibition.

Every three years, the Association for Goldsmiths’ Art based in Hanau presents the Golden Ring of Honour to a notable person who has achieved outstanding work in the field of goldsmiths’ art.

Competing for the Friedrich Becker Prize 2014 were 113 artists from 19 nations with jewelry as well as silver hollow- and flatware. Independent design with the highest standard of execution and the inclusion of new materials and techniques were as equally desirable as was the handling of the classical materials for the design of jewelry, hollow- and flatware. 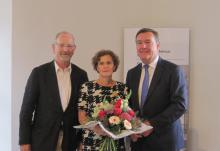