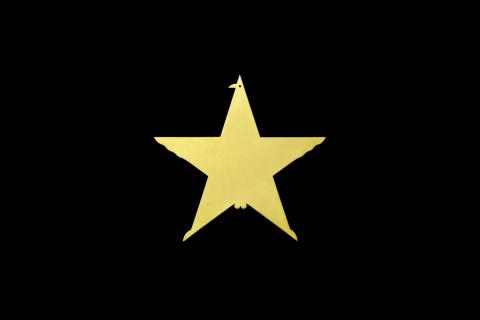 Every three years, the Association for Goldsmiths’ Art based in Hanau presents the Golden Ring of Honour to a notable person who has achieved outstanding work in the field of goldsmiths’ art.

The Ring of Honor 2014, the highest international distinction for goldsmiths’ art, was presented to Robert Smit of Amsterdam last Saturday at the Kurhaus Hanau Wilhelmsbad in the presence of the Mayor of Hanau, Claus Kaminsky, and the President of the Society for Goldsmiths’ Art, Hartwig Rhode, as well as many honored guests including the former ring honorees Otto Künzli of Munich, Michael Rowe of London, Peter Skubic of St. Michael, and Ebbe Weiss-Weingart of Salem. The 2014 ring made by Professor Otto Künzli expresses a humorous interpretation of the eagle required by the regulations in a star-form design together with the bird’s symbolically addressed attributes.

The Dutch jewelry artist Robert Smit (* 1941 in Delft) is counted among the eminent pioneers of avant-garde jewelry. In her laudatory address, Dr. Ellen Maurer-Zilioli, Munich, honored Robert Smit’s work which was impacted by the ZERO group during the early stage and especially by contact with and the friendship of the Informal artist Jan Schoonhoven. Since 2006, in addition to sketching and painting, Smit has included photocopying and computer graphics in his work, as demonstrated by the current works on the theme Madonna delle Dolomiti.