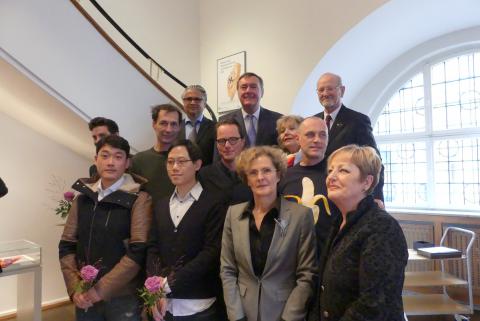 From November 6, 2016, through January 12, 2017, the German Goldsmiths’ House in Hanau will be presenting the exhibition 18th Silver Triennial International. The Silver Triennial is one of the most important international competitions in the area of silversmithing and metal design. This year 138 artists from 24 nations participated in the main and youth competitions. The jury selected seven works as prizewinners and 77 objects by 65 artists for the exhibition. The wealth of ideas is expressed in materials, techniques, and concepts with regard to subject matter.

In the main competition, the first prize was awarded to the silversmith Eelco Veenman from ‘s-Hertogenbosch, The Netherlands, whose object, The Utah Teapot Distorted – Silver is a Virtual Material, convinced the jury. The second prize went to David Bielander from Munich, the third prize to Ludwig Menzel from Berlin. In the Youth Promotion Competition, the jury awarded the first prize to the work, The Expression of Nature Images with Time-Related Characteristics / Memoir_Drops, by the South Korean artist Sanghoon Kim, the second prize to Yu-Chun Chang of Taiwan, and the third prize to Anna Vlahos of Greece. Tobias Mendoza from Mainz, Germany, was recognized with the fourth prize.

The exhibition pieces, some consisting of multiple parts, cover a broad spectrum of forms and impressively reflect the current trends in the silversmith scene. In addition to nonfunctional objects, there are utilitarian works which include forged pitchers, bowls with a crystalline surface, and dining utensils made from recycled knife blades.

The Silver Triennial has been organized by the Association for Goldsmiths’ Art in cooperation with the City of Hanau every three years since 1968. It invites established artists as well as artists of the following generation to submit their ideas on functional hollow- and flatware and function-free objects. At first it was limited to the European countries; but since 1992, it has been aimed at artists from across the globe.

The monetary prizes for the 18th Silver Triennial, with a total of 19,500 euros were donated by the Salem artist Ebbe Weiss-Weingart, the Lion’s Club of Hanau, as well as the firms Robbe & Berking, Flensburg, and Heimerle + Meule, Pforzheim.