The German Goldsmiths’ House on Altstädter Markt in Hanau is one of the most historically significant buildings in Hanau’s Old Town and was used initially as a town hall. Its construction was commenced in 1537/38, during the Renaissance period. When Hanau’s New Town was founded in 1597, Dutch and Walloon incomers settled there, many of them goldsmiths. They came together to form the Guild of Goldsmiths and Silversmiths in 1610, thereby laying the foundation for the heyday of goldsmiths’ art in Hanau in the latter half of the 18th century. Not least a participant in this development was the “Hanauische Academie der Zeichenkunst”, founded in 1772, which enabled a qualified goldsmith’s and silversmith’s apprenticeship from 1889 onwards. Use of the goldsmiths’ house as a town hall was abandoned as early as circa 1900, when the Hanau Historical Society installed a museum on the city’s history. 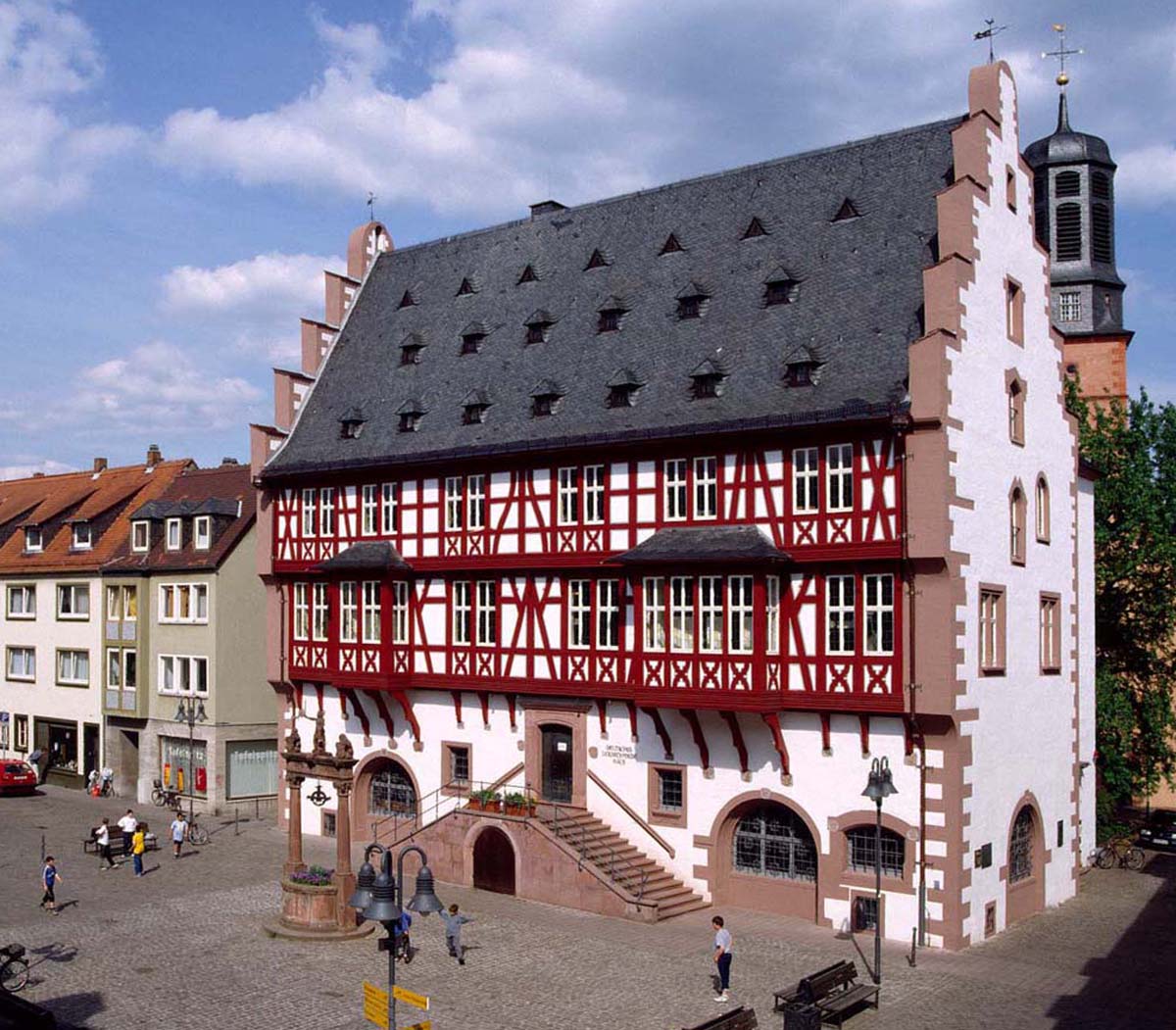 The building owes its present-day role as the German Goldsmiths’ House to the Berlin-based jeweler and goldsmith Ferdinand Richard Wilm (1880–1971), who was a leading proponent of artisanal gold and silver smithery. In the early 1940s Wilm recommended that the City of Hanau set up a center of precious metal-based art in the former town hall – the concept of the German Goldsmiths’ House as a place of encounters for artisanal gold and silver smithery was born. Wilm received support for his project from the highest ranks of the National Socialist German Workers’ Party: equipment and laborers for the conversion were approved and provided through the intervention of the Reich Chancellery in Berlin in 1942. The House’s inauguration took place on October 18, 1942.

On March 19, 1945, the building fell victim to a bombing raid. During the reconstruction between 1955–1958 the premises were adapted entirely for use as an exhibition venue for German and international jewelry and hollowware design. From July 1981 the museum was subjected to thorough interior renovation and was reopened in time for the 40th anniversary of the Goldsmiths’ House on October 23, 1982. Further construction measures were performed in 2004/05 – the House underwent conversion for the use of persons of reduced mobility with the addition of an elevator and a redesign of the washrooms. 2019 saw the contemporary renovation of the entrance hall and basement by means of a lavish redesign.

With its diverse array of national and international exhibitions on individual jewelry and hollowware designers and presentations by various artists’ groups, the German Goldsmiths’ House assumes an important place in Hanau’s museum landscape and is furthermore one of the most important centers of artistic gold and silver smithery in Germany.