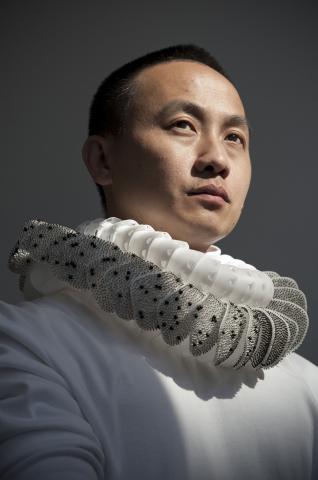 Competing for the Friedrich Becker Prize 2014 were 113 artists from 19 nations with jewelry as well as silver hollow- and flatware. Independent design with the highest standard of execution and the inclusion of new materials and techniques were as equally desirable as was the handling of the classical materials for the design of jewelry, hollow- and flatware.

The jury decided upon the jewelry designer Sam Tho Duong (b. 1969) of Pforzheim, who received his design diploma in 2002 from the University of Design Pforzheim and has since been working independently. The artist has been represented with his works in numerous exhibitions both domestic and foreign as well as in public and private collections. Between 1999 and 2012, Sam Tho Duong was awarded several significant prizes.

The three works, lemitcA VA2, VB2, and VC3, by this Pforzheim artist persuaded the jury with their function as neck jewelry as well as objects. The basic material (yogurt drink bottles) was worked by cutting, stamping, or folding. An extremely elaborate insertion technique allowed the creation of this unusual neck or head jewelry which became a visual and tactile experience through the addition of onyx and freshwater rice-corn pearls.