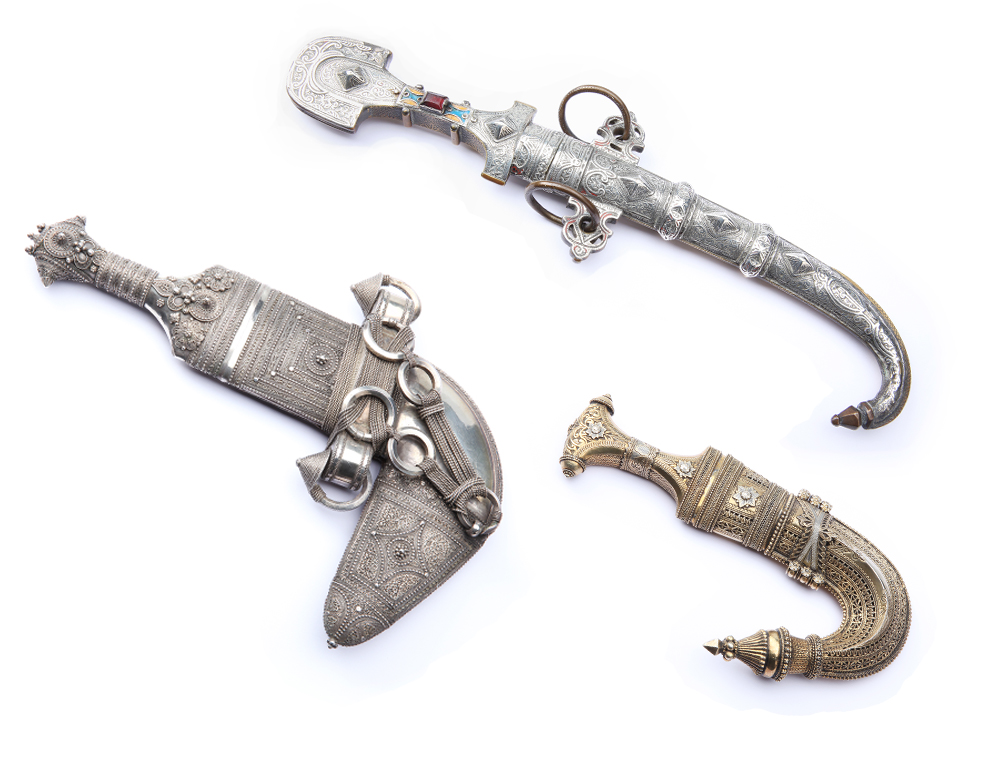 In the exhibition Oriental Daggers, the German Goldsmiths‘ House in Hanau will be presenting selected pieces from an extensive private collection from April 24 through September 28, 2016. On display are nearly 100 works of Islamic goldsmith and weaponry art from the Arabian Peninsula, North Africa, Turkey, and India, among others.

The show is devoted to two types of Islamic daggers: the jambya, which is regionally also known as the khanjar, and the koumya. The most noticeable visual feature lies in the craftsmanship of the designs of the works as pieces of jewelry.

Particular attention was paid to the artistic combination of the sheaths and hilts. Correspondingly diverse is their appearance. With the most varied dissimilarity of techniques, the surfaces were decorated and ornamentally classified. The assortment extends from strictly ornamental design to elaborate floral motifs. The predominant material is silver, with occasionally the use of gold. The utilization of enamel, glass stones, and gems also plays a lesser role.

The majority of the exhibited items can be dated in the 19th and 20th Centuries. ­­­­While the jambya found wide dispersion in the Arabian world, the koumya can be found predominantly in the south of Morocco. Traditionally, both types belong to the male costume and are worn on the front of the body. For the jambya, this purpose is served by a belt which also provides additional space for various receptacles and containers, while the koumya is worn on a bandolier. As the daggers themselves, the belts and the straps for fastening may also be decorated with precious ornamentation.

The expense and the arrangement of the pieces certainly serve social requirements as well. Through the ornamentation of the daggers, the wearer can express his own prestige and his social position within the society. In addition, the regional origin or the affiliation with a particular tribe of some pieces can be identified through their design.

The arrangement of the exhibited works as a whole as presented here makes it possible for the visitor to gain an overview of the the two Islamic weapon types and some of their variations.­