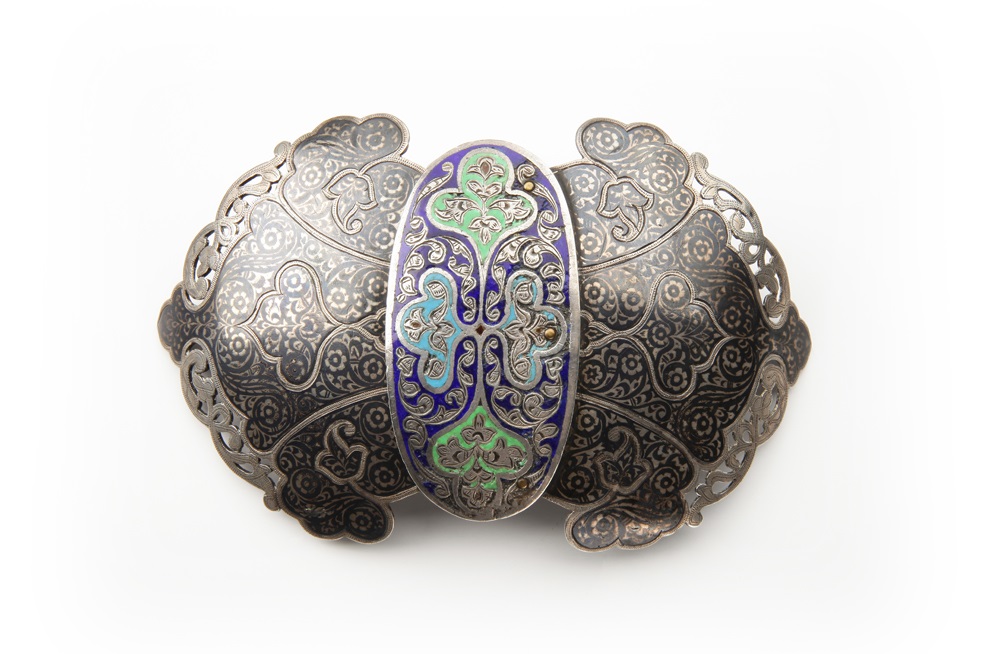 Belt Closures from the Balkan States, Asia, and North Africa

As do all articles of clothing, belts and their closures are governed by fashion. Not only do they keep skirts and trousers in the desired position and hold open garments closed, but also they can express wealth, social status, and regional origin. Many belts and belt closures additionally serve as jewelry. A further aspect is much more difficult for the observer to interpret – their magical or symbolic meaning.

The exhibition displays around 150 examples from 30 countries belonging to an extensive private collection. The exhibition pieces demonstrate an immense diversity of design elements such as elaborate ornamental patterns, landscape views, botanical motifs, and human forms. Here, a wide spectrum of different techniques, design inceptions, motifs, and artistic details is represented. Originally, belts were made of natural materials such as leather, hair, wool/cotton, or silk. Later, precious metals were also utilized, primarily in the crafting of closures. The actual fasteners were hooks and eyes or hinges held closed with a pivot and were often covered with decorative plates.

One of the origins of the art of the goldsmith can be traced to the Near East. The ornamentation is a combination of the ancient oriental legacy and the motifs from the three religions stemming from Abraham – Judaism, Christianity, and Islam. Many symbols were common to all three. Among these is the hexagram, which in many places, beginning in the 20th Century and spreading from Europe, was often understood as a secular symbol of the Zionist Movement. In the Arabian Caliphates and in the Ottoman Empire it was primarily the Jewish masters, the Christian Armenians, and the Muslim Caucasians who developed the art of the goldsmith to the golden age that we still admire in jewelry collections today.

Jewish works are brilliant in their perfect execution of filigree work and granulation, while the Caucasian and Central Asiatic goldsmiths often utilized niello, an inlay of a blue-black mass on a silver base, to give their works their characteristic ornamentation.

The intermingling of the peoples of the Ottoman Empire is also reflected in their jewelry culture. Thus we find similar belt closures in Macedonia, Bulgaria, Asia Minor, Syria, and the Caucasus. Among these, special mention is merited by the large-sized closures of the Kurdish men’s traditional costume which remind us that earlier, the belts worn by both sexes had this type of closure.

As in the Balkan countries, in the rural areas of Northwest Africa people also originally used belts made of wool. In the Aurès Mountains, from which came most of the examples shown here, silver belts were not found in wider distribution until the middle of the 20th Century. In Central Asia, as in the Mediterranean area, it was primarily the urban upper class people who wore metal belts or richly decorated leather belts.

Through the trade routes such as the Silk Road, the Far and Near East were always connected to each other by reciprocal influences. The result is a map of cultural regions without distinct borders that are to be understood only as sections of a continuum: India, Indonesia, Southeast Asia, China, and Japan.

At the hub lies Tibet which is represented in this exhibition above all by several beautifully ornamented tinder pouches and coin purses. They remind us that the belt often played and still plays an important function as a carrier. The further distant an area is from the Islamic region, the more frequently do figural representations appear. In India and Southeast Asia, these are mythological, Hindu, or Buddhist motifs, while in China, the addition of artistically fashioned botanical and zoological motifs are notable.

A special characteristic is exhibited by the belts and closures from Japan in their material as well as in their ornamental technique. Here, the formal side is decorated with several closures made of Satsuma porcelain.

Jewellery of the hill tribes of Asia